In today’s Twitterverse, it doesn’t take much to get noticed as a digital opportunist. You can insert yourself into a national debate, a blazing scandal, a hot topic or the trending line of a hot athlete. But the real question remains – did you do it for the right PR or the wrong PR?

Good, bad or indifferent – many companies find themselves pondering whether to insert themselves into a news timeline.

Some do it to raise money, such as a recent email from Indiana Sen. Vi Simpson asking people to donate to her party after national media derided a fellow GOP legislator for berating the Girl Scouts. That may have promoted GOP House Leader to munch on thin mints and wear his Scouts badge apparel one day to mug for the cameras. Simpson smartly used media to make her email smackdown. And she’s getting some headlines of her own this session as a result.

Then there’s the drive for pure and simple notoriety, like the woman who claimed she was a sorority girl asking out “Jerry Linn,” who she says just won the Super Bowl for the New York Giants. Though wrong on multiple counts (she isn’t a sorority woman and she clearly doesn’t know her facts between basketball and football), her YouTube video (as of this airing) has been viewed more than 550,000 times. Sports media (unsmartly) blasted this one out and didn’t even bother to check whether it was real. Punked is as punked does.

Jeremy Lin, by Fast Company’s most recent update, is “all things to all people.” Perhaps that’s why others want to ride on his “universal reliability” as he shines in the NBA.

Getting noticed is part of the opportunity created by opportunists.

My Indy Star friend Bill McCleery sparked my interest in the subject when he posted a hand-drawn sign on his Facebook page with credit to the Purple Lotus Kava Bar in West Palm Beach, Florida. 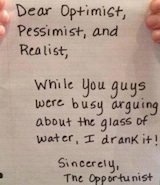 Why Listen to Kyle Communications?

Kyle Communications is a company with crossover experience in media—traditional, social, and public relations. We’re very vested in media today. We participate, we go, we engage, we schmingle. We're in the conversation. From ethics to access, we help reporters do their jobs. From the no-spin zone to calm in crisis, we help clients present their stories. You won’t find this particular mix at any agency. Just ask.